Chris Thile has never been shy about genre-hopping.

In his early 20s, singing and playing with the band Nickel Creek, the mandolin virtuoso covered songs by slacker-rock heroes Pavement, picking along with a fiddler and a guitarist. And a year ago, he was onstage with his band at Bonnaroo, the Tennessee summer music festival, working the crowd with acoustic string-band covers of rock songs by The Cars, Radiohead and others.

Now, he’s trying to get the same fans just as excited about classical music. For his latest record, “Bach: Sonatas and Partitas Vol. 1,” Mr. Thile, 32, has taken an approach of unadorned simplicity: It is just him, alone in a room with his mandolin, playing three suites16 tracks in allof works written for solo violin by Johann Sebastian Bach, the master composer of late-Baroque church music. 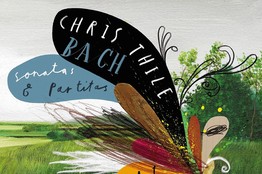 Mr. Thile argues that the same crowds that headbang to Radiohead anthems should be just as able to get psyched for Bach or Mahler.

“The great musics of the world are great for very similar structural reasons: good melody, good harmony, and a balance of feminine and masculine energy. What makes one type of music classical and one bluegrass and one folkthese things aren’t what’s important,” he said at a recent interview in midtown Manhattan. “My thesis statement would beBach didn’t write Baroque music. He wrote great music.”

At times, Mr. Thile’s new record has the same technical “wow factor” as his work with his band, Punch Brothers. On the “Presto” from Bach’s Sonata No. 1 in G minor, for example, Mr. Thile’s fingers trace Bach’s elegant melody lines and near-nonstop arpeggios at an off-to-the-races tempo, up and down the neck of his instrumentnot unlike a bluegrass fiddle tune.

At other points, such as the “Allemanda” from the Partita No. 1 in B minor, Mr. Thile plays in a purely Baroque vernacular, shedding any trace of bluegrass and making his mandolin sound stately and delicate, not unlike the lutes played by Bach’s Renaissance forebears.

Born in Oceanside, Calif. in 1981, Mr. Thile grew up in Southern California listening to folk music on the local public-radio station and hearing live bluegrass bands at a pizza shop in nearby Carlsbad. He first picked up a mandolinthe eight-stringed instrument that most fans of traditional country music remember best in the hands of bluegrass pioneer Bill Monroewhen he was 5 years old. His piano-tuner father and his mother were “folkies,” he said, and his maternal grandfather, Robert Shallenberg, was an avant-garde composer who taught music at the University of Illinois and Indiana University.

At age 14, Mr. Thile’s family moved to southwestern Kentuckywithin a few hours’ drive from both the birthplace of bluegrass music and the cradle of pop country music, Nashvilleafter his father got a job at Murray State University. Mr. Thile would later attend Murray State for three semesters.

Nickel Creek, Mr. Thile’s first band, won a Grammy for Best Contemporary Folk Album in 2003 for their Alison Krauss-produced album, “This Side,” which peaked at No. 2 on the Billboard Top Country Albums chart and later went gold. Mr. Thile founded his current band, Punch Brothers, in 2006 to help him record one of his own compositions, and the core of the band later backed him on his solo album “How to Grow a Woman from the Ground.” The group gelled around a style that recalled “new grass” of the 1970s and 1980s, which incorporated jazz and rock into the traditional string-band style, and has recorded three albums and sold more than 200,000 albums, according to its label, Nonesuch Records.

Mr. Thile moved to New York eight years ago, and has over the years added vocals and instrumental parts to records by Top 40 country singers including Eric Church, Keith Urban, and his friend Dierks Bentley.

Last year, he was awarded the prestigious MacArthur Fellowshipcommonly known as the “genius grant”and in 2011 made a richly composed fusion record with a classical-bluegrass supergroup headed by cellist Yo-Yo Ma, all while keeping up a punishing tour schedule with Punch Brothers and other groups. He and Punch Brothers were recently tapped to sing and play on the soundtrack to “Inside Llewyn Davis,” a forthcoming film by Joel and Ethan Coen, which follows a week in the life of a fictional folk singer in early-1960s Greenwich Village.

“He’s one of those people where, there’s nothing that he becomes interested in that he doesn’t go all the way in,” said Mr. Ma, the multiple-Grammy-winning cellist who has recorded and toured with Mr. Thile. “When he’s playing Bach, it’s with the utmost understanding of the human condition. He responds to the nature of the instrument, and he becomes the contentHe’s organically attuned to the music.”

There is some precedent for bluegrass pickers dabbling in classical musicbanjoist Bela Fleck recorded an album of the works of Bach, Debussy, Chopin and others in 2001. Mr. Ma has collaborated with classical bassist Edgar Meyer and fiddler Mark O’Connor on several classical-folk fusion records.

But few bluegrass musicians have embraced classical music so thoroughly: Mr. Thile in 2009 premiered his first concerto for mandolin and orchestra, and Punch Brothers have taken to playing the third movement of Bach’s Third Brandenburg Concerto at concerts, interspersed amid the band’s usual melodic, progressive bluegrass songs. “You should just watch people flip!” Mr. Thile says. “I’m not saying you’ve got to like, jump up and down and scream during a Bach performance,” he says, before noting that “the classical music hall was like that, 200 years ago, you know. You have reports of people, you know, whooping and hollering and demanding encore performances of thingsThey were riotous!”

This month, Mr. Thile is touring with Mr. Ma, Mr. Meyer, Nashville Bluegrass Band fiddler Stuart Duncan and singer Aoife O’Donovan in support of their 2011 album “The Goat Rodeo Sessions,” followed by an international solo tour, on which he will play cuts from the Bach record, starting in early October.

In November, Nonesuch will release the soundtrack to “Inside Llewyn Davis,” on which Mr. Thile with his Punch Brothers bandmates Chris Eldridge and Gabe Witcher, as well as Justin Timberlake and Mumford & Sons’ Marcus Mumford.

“Chris is a leading edge of a generational shift,” said T Bone Burnett, a legendary music producer who has made records with a wide array of pop and Americana acts, including Counting Crows, Elton John, Elvis Costello and Willie Nelson. Mr. Burnett first heard of Punch Brothers from a mutual friend and asked them to be a part of a benefit-concert series that he organized in New York and Boston in 2010. From there, the band worked with Mr. Burnett, well-known for his work curating music for Hollywood films, on the “The Hunger Games: Songs from District 12 and Beyond.” It was Mr. Burnett who asked Mr. Thile’s band to play on the Coen Brothers’ film soundtrack, which he is producing.

Separately, Mr. Thile is searching for a home to buy in New York City with his girlfriend, the television actress Claire Coffee, and practicing on a 1924 Gibson F5 mandolin, designed by legendary instrument-maker Lloyd Loar, an heirloom instrument that he bought last year using some of the $500,000 grant he won as part of the MacArthur Foundation’s genius award (Mr. Thile declined to say how much he paid for the instrument, but original Loar mandolins can cost up to $250,000). He says that these days, money is flush enough that he doesn’t take studio work unless it is for friends.

“They’re all passion projects for me  It hasn’t always been that way. When someone came at me with a high number it used to be very hard to say no,” Mr. Thile says. “Now I can’t even believe I’m in the position I’m in.”